In the early 80’s, Chi Upsilon Sigma National Latin Sorority, Inc. ® was the first Latina sorority to ever participate in Stepping. SEVEN’s purpose is to carry on this legacy and to continue to be innovators in the world of Latino Greek Life.

SEVEN, the official National Performance Team, was recognized in January 2005. SEVEN has “promoted sisterhood, teamwork, scholarship, dance achievement, high moral standards and continued pride and enthusiasm for, and within the sorority,” says Diana Arias of Upsilon Chapter. SEVEN and its agents (members) represent CUS on a national and local level.

SEVEN’S Mission Statement: “Our goal is simply stated: To assist Chi Upsilon Sigma ® in continuously improving the quality of our sisterhood through each and every performance by: providing coach and team feedback and ideas, nurturing good sportsmanship and respect through coach networking and communication, promoting safety guidelines, physical and mental well-being, leadership training and growth.”

Since our formative years, we have embraced these forms of communication and expression as a large part of our sorority’s culture. Stepping has deep roots in various African cultures. Stepping is mainly used as forms of celebration, demonstrations of power and often seen in rites of passage ceremonies. Popularized by Historically Black Greek Letter Organizations in the 50’s and 60’s, stepping has evolved and been influenced by many other dance styles and even gymnastics, thus creating a richer and more entertaining experience.

Strolling is another form of expression that is more rhythmic and dance based. Strolling consists of members in a single file line, performing a routine in unison, in a forward motion to music (usually remixed with different songs). Chi Upsilon Sigma ® has been at the forefront of revolutionizing the Step and Stroll genres for Latino Greek Letter Organizations. We were the FIRST to have a “Stroll Dynasty”, and have continued to wow crowds with our organic style ever since. Stepping has always been a mainstay in our Sorority’s culture, and our no-frills approach has made us stand out and continue to advance in major competitions nationwide. 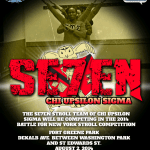 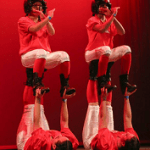 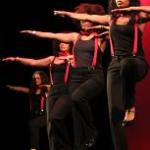 To request a performance from our SEVEN National Performance Team please contact our National Director of SEVEN via dos@justbecus.org.

Please understand that our performance team may not be able to fulfill all requests and may deny your request based on availability of the team, costs, transportation or at their discretion. Once the request form is filled out a member of the team will contact you to further discuss the details of the event and walk you through the contract process.